So you might've read a few of these now, and there are some recurring themes you may have noticed. As with my other location jobs last year, we did the usuals working through the checklist - y'know: recycling, Ram Board to protect the floor, water coolers, barely printing anything; but we also did a few other bits n pieces. First off, working at Great Guns was new for me, so I thought I'd better out myself before I got too far with my green agenda. I emailed Lucien, the producer, plus Mathew and Kate, to let them know how I like to do my shoots. Luckily they were all on board, so I cracked on. When Hannah Phillips joined me to PA, she got the same briefing. Between us, we decided the welcome packs for the agency needed to be useful, not disposable -  we had 8 people coming in from NYC - oh the air miles! Wine was a default choice, and Hannah also came up with the great idea of including a reusable coffee cup from KeepCup - you can order them in whatever colour way you like so we went with a little burgundy/cream combo, for Great Guns of course. Useful and cool! 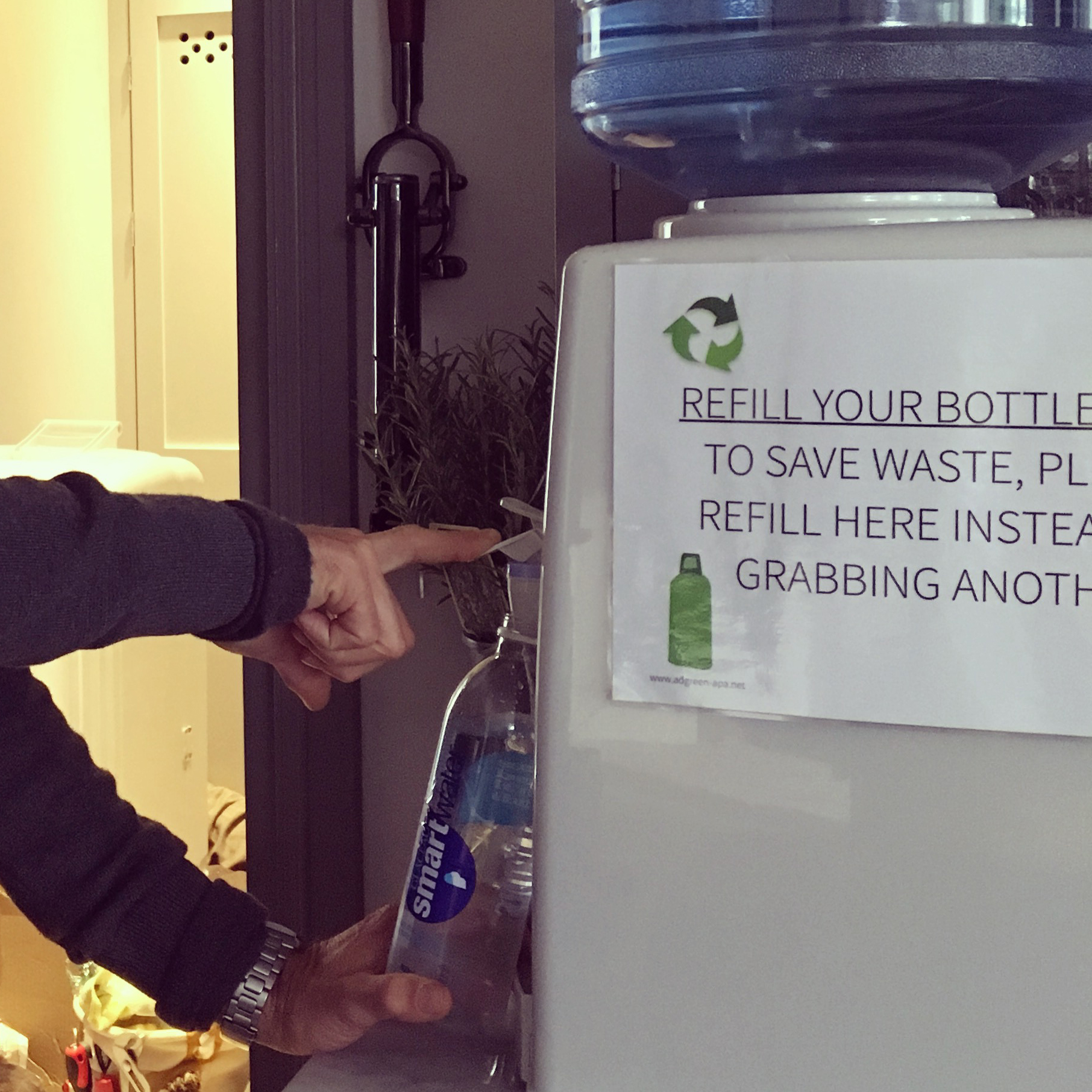 I also got a noticeboard for the agency copy of the schedule, boards and call sheet, and some glasses and jug for their table (all from Get Set Hire). Theoretically they were expecting this as I'd included some 'green notes' in the PPM deck and warned everyone that printing would be minimal! I could've done with a second noticeboard for the camera and AD team, but the wall of the living room sufficed.

We couldn't find a near enough unit base to the location (apparently they keep getting sold for housing developments) but this had a silver lining. We booked the solar loo again from At Your Convenience (so no genny costs there) and had it parked just down from the house. We also had a great caterer, as recommended by the location: Marmelo Kitchen. These guys provide a service somewhere between a full kitchen (which we weren't allowed on the street) and hot boxes (which can be hit or miss). Alex from their team served up a beautiful breakfast (think Gail's but better) and then had lunch delivered mid morning and served that up too. We had real plates and cutlery, and everything was fresh and delicious - great veggie options and AMAZING cakes. And I don't think anyone got the nod on after lunch. They also have a cafe if you're in the Leyton area and fancy trying before you buy. The food was a little more pricey, but offset by the fact that we didn't have any overtime or mileage on a kitchen. 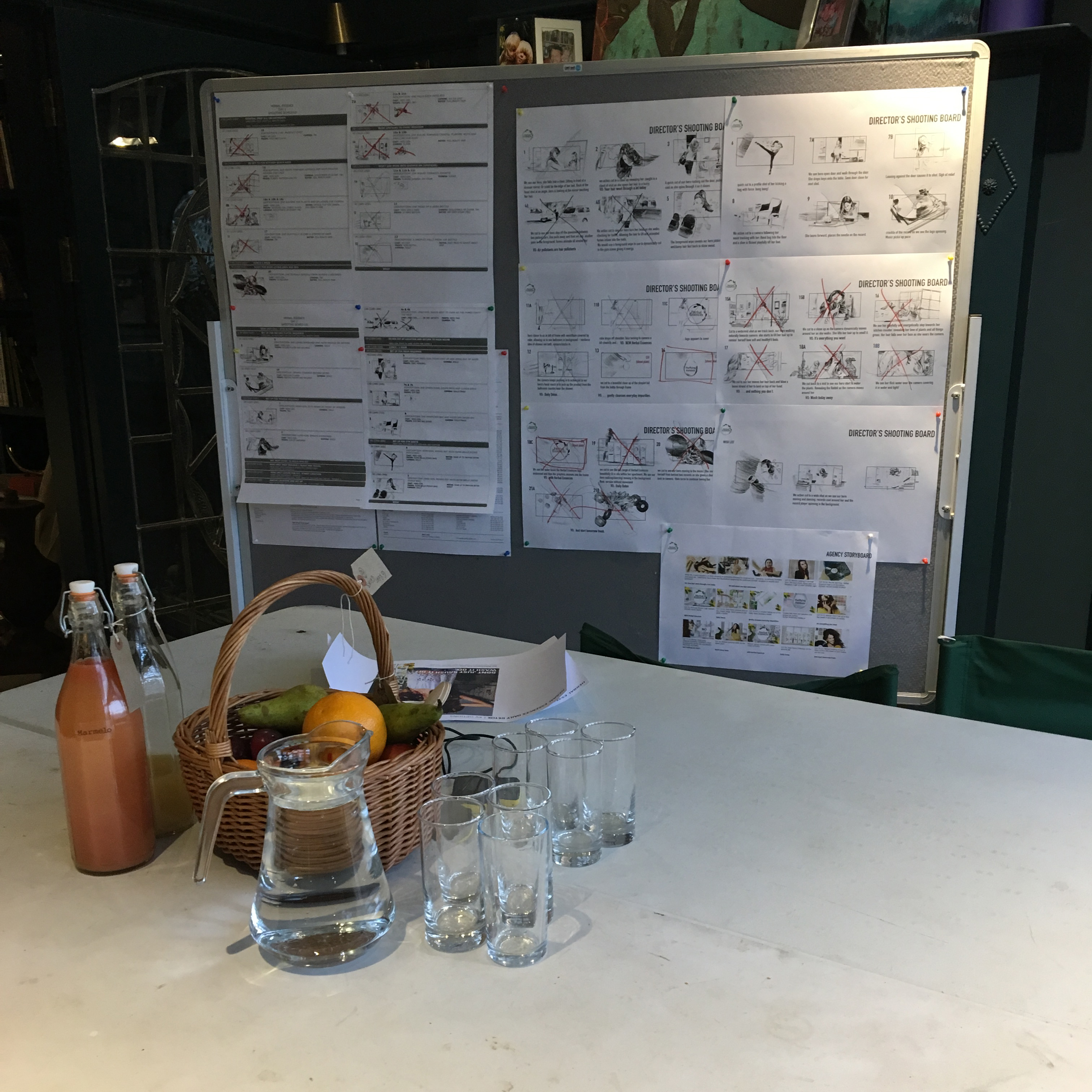 Props wise, pretty much everything was hired, apart from quite a few plants, some of which ended up on my balcony (thanks!) and some are currently brightening up the Great Guns office. The hero wardrobe was posted back to the agency in NYC and there were a handful of items that couldn't be returned which were also shared around the office. 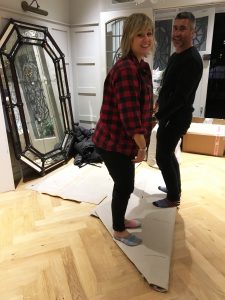 Lucy loving that Ram Board!

Gary Davies and his best boy Lawrence Duffy had also decreed we didn't need a genny, which was music to my ears, but alas after running catering's hot plates (we thought they were bringing the gas heaters) and tea urn from the same power at our house location, we had to give in and get a small genny from Get Set Hire. But at least we didn't have a massive one, which of course also saved us a lot of money in hourly running time! Ram Board was also a big hit with location manager Yael Mindel. The house actually had another shoot in the following week and she spoke to them about leaving the floor covering down to save doubling up but in the end we had to remove some of it. However we hear that they'd ordered some more themselves to re-do it which was next best thing. Runner Lucy Kelly was also very into it:

At last, no more static shocks from pulling up Correx! So much easier and I love that we can recycle it.

I also managed to print off the full range of signs from the site, and got them laminated (thanks to Tom and Elin in the office!) so that I could wipe them clean and reuse them on every job. They're sitting in my shoot bag next to the Nespresso pod recycling bags as I type. As normal, our crew were told about all of our green shenanigans prior to the shoot and were encouraged to bring bottles for the cooler and Thermoses or Keep Cups. Otherwise we just provided compostable cups, and we had 3 tabletop coolers - no bottled water. I don't think any of our American guests' KeepCups made it to set though which was a shame, although perhaps we should've made it clearer that our intention in giving them as gifts was to bring them along!

We also clocked up a few more air miles due to our lovely producer, DP, hair stylist and artist flying in for the job, although these emissions could've been offset. We used a LOT of couriers too, and taxis, which I guess is normal when you have guests from overseas, although they weren't moving around quite enough to warrant a full time driver - and I'm not sure a hybrid or electric agency driver is out there? Addison Lee do have hybrids, but there doesn't seem to be a way to request only that type of car. We did have a few Uber Priuses, which is better, but I'm still waiting for their Uber Electric service to start... hurry up Uber!

All in all, more good learning and testing but still room for improvement!