It's been a while since we've had a case study, but the Biscuit Filmworks team have put together some great notes from a recent shoot for Veg Power, reflecting many of the Five Easy Things we all know and love. Take it away James Murray...

Please note this shoot took place prior to the lockdown.

"We shot the Veg Power commercial on location in one day. Our nominated green steward was one of our runners, and they were in charge of supervising and answering any questions the crew may have had about the measures we were taking to make this shoot as sustainable as possible. We were in a residential area and chose the closest possible unit base which was a short 5-minute drive away. All crew were encouraged to car pool and use public transport wherever possible to make their way to and from the shoot. The fact that the location had multiple travel links helped with this. The key heads of department including the Location Manager, Production Designer and Wardrobe Stylist were made aware of our efforts to reduce our carbon footprint as much as possible from the very beginning of production. Here's a run down of the measures we implemented...

Printing
No print outs were available on set and all crew were warned of this ahead of the shoot. All departments had their briefs, or any required paperwork, emailed to them. Some crew brought tablets or simply viewed the documents on their phone. 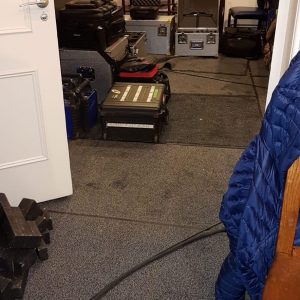 Reusable matting to protect the floors

Location
The Location Manager liaised with Get Set Hire and ordered reusable mats to protect the flooring, rather than using correx sheets. Quantum waste, who are an eco-friendly waste management service, were booked online the day before the shoot to collect all our waste from the unit base and the location. The Location Manager was in charge of overseeing this process.

Props
The Production Designer and his department were asked to ensure that all props were either hired or recycled/ donated after the shoot. The vegetables that were used were real and large quantities had to be purchased as back-ups. At the end of the shoot, all of the vegetables were put into cardboard crates and all crew, cast and client were able to help themselves. None of the vegetables ended up going to waste. 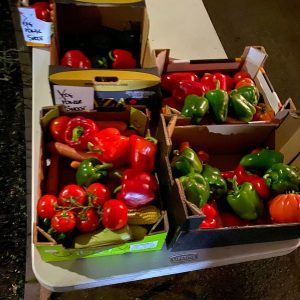 Offering up leftover prop veg to the crew

Wardrobe
The Wardrobe Stylist ensured that any clothing that wasn’t chosen or used for the shoot was returned or donated.

Catering
Expresso Bongo Kitchen, who provided catering on the day were also briefed on how to appropriately dispose of food waste and were asked not to serve any red meat. Some of the alternatives they provided were veggie and turkey sausages to substitute pork sausages for breakfast, and we had two different fish options for lunch. China plates and metal cutlery were also provided for both breakfast and lunch to minimise waste.

Recycling & Waste
Get Set Hire provided dual bins and clear bin liners where food waste could be separated from all other waste. On the day, we decided to use both of the sides of the bin for recycled waste (one side for cardboard & paper and one for plastic) and added an additional labelled bin just for food waste to help crew differentiate. 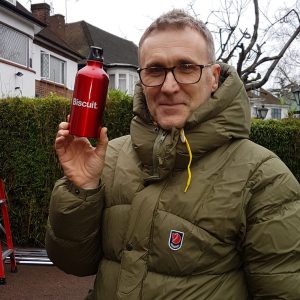 One of our bottles

Plastic
In an attempt to reduce the use of any plastic on set, the crew were encouraged to bring their own reusable water bottles. Biscuit water bottles were made available to those who didn’t have one already. Get Set Hire provided the water dispensers and refills. No single use plastic cups or bottles were brought to set and the hot drinks cups that the catering provided were 100% biodegradable and crew were instructed to put them in with the food waste.

Carbon Offsetting
One of our Biscuit policies is that we carbon offset each production once it has wrapped. We do this via Carbon Aware Productions. Their website helps estimate the amount of carbon produced. This is offset by planting a certain number of trees. Once a payment is made, they then send you a certificate to confirm how many trees will be planted. In this case, as we had a regular size crew and no unit moves, so 1 tree was planted in order to carbon offset the production. 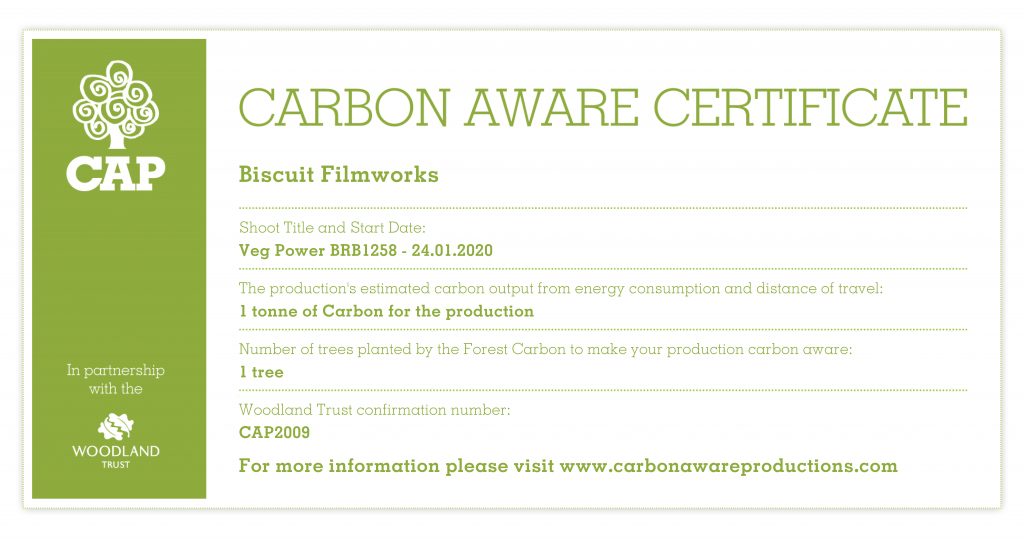 Our carbon offset certificate from CAP

In addition to the above on this particular project, we now include the following on all of our treatments, giving agencies the heads up on how we like to operate and what's important to us:

Biscuit Filmworks recognises the enormity of the climate emergency facing the planet, and we are committed to doing our utmost to
offset and limit the environmental impact and carbon footprint of all aspects of our production, both on and off set. However, we also realise that given the scale and immediacy of the crisis we face, this is not enough, which is why our aim is to work towards completely carbon neutral productions going forward, and beyond that to net carbon positive productions.

We work in partnership with Carbon Aware Productions to make sure that we understand the environmental impact of our work, and can work to mitigate it as far as possible. All of our company flights are paired with contributions to tree-planting, in order to help offset both our shoot and office.

All of our productions follow AdGreen guidelines as far as possible. This is reflected in all call sheets and production partners, impacting who we work with and our expectations of our shared environmental practices. We include on set recycling as a part of all of our shoots. We will distribute one reusable water bottle per crew member for the duration of each shoot, collected by production at wrap, sterilised and reused wherever possible. We request that any additional crews that the agency might be organising for BTS or stills also do not distribute plastic water bottles on set. We respectfully re-quest that PPM documents and directors’ treatments are not printed. Some key crew members will need their own copies of storyboards and schedules, but the client and agency will receive one printed copy of each if requested prior to the shoot - any other copies will be distributed digitally. We have digital tablets which can be made available if we are notified prior to the PPM. We request that people minimise transport usage to and from set - we can help if you need recommendations for green car services.

Ultimately, we recognise that our industry is very good at talking about things. In fact... it’s what we’ve just done here. However, Biscuit Filmworks recognises that actions are what is necessary.